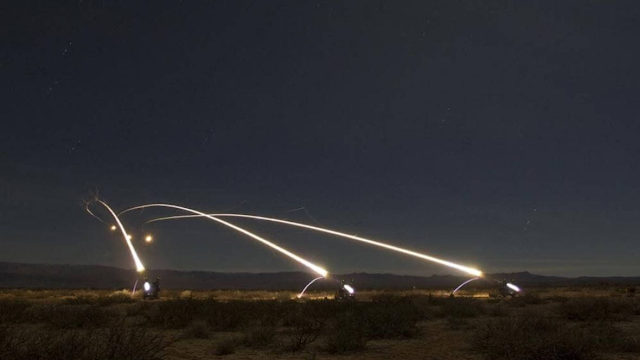 Before I begin this post, I want to stress that this is my opinion only and this post is intended for educational purposes only. This post should not be construed as investment advice.

I am a relative newbie to options trading. I only buy calls if I think an asset is going up, or I buy puts when I think an asset will go down in price. I am also aware that most options expire worthless.

One major thing I have learned about trading options is that time decay can decimate a trade that once looked good. The key, in my opinion, is to get in and get out when an attractive profit is on the table.

Let's take a look at Raytheon.

As the Russian invasion of Ukraine was in full swing it was announced that Ukrainian President Zelensky was going to make a speech before Congress on March 16.

I thought there would be no doubt that he make an impassioned speech requesting a massive influx of  military and humanitarian aid. It got me making a list of assistance that I would want if I was asking hot help. One of those items would be Stinger Missiles, manufactured by Raytheon.

These surface to air missiles can be rapidly deployed into the field and are highly effective at shooting down helicopters and aircraft.

On March 15, I looked at the daily chart for RTX  and I liked what I saw

The stock had pulled back from a recent earnings pop and looked like it was poised to continue heading up.

On March 16, Zelensky made his speech to Congress, and there were few dry eyes in the room. That day, RTX dropped down to the 50 MA and a trend line. My option declined in value from $4.70 to $3.60 in value. In my mind, there was no reason to panic on that trade.

On March 17, massive military aid was announced to Ukraine include the transfer of 800 Stinger missiles and 2,000 Javelin missiles, also manufactured by Raytheon and Lockheed Martin. Most recently, Raytheon just completed a successful test flight of a hypersonic missile, in conjunction with Northrop Grumman.

Why did I sell the option? Three reasons.

What's Next for RTX?
What's next is anyone's guess, but here's what I see in the charts.
RTX may rise in value or it may fall, but for now, it's definitely on my watch list.
Posted by Cam White at 9:58 AM

Are the Markets Due for a Short-Term Correction? 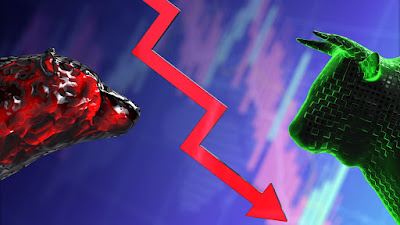 The markets have been exuberantly  bullish since Election Day on November 3.

In spite of election challenges, unemployment news, and a global sense of unease about food and housing security, the markets have continued to churn upward at a very bullish clip.

The certification of election results, coupled with the distribution of a Covid-19 vaccine are continuing to fuel bullish momentum.

From a technical standpoint however, the markets have been very "toppy". 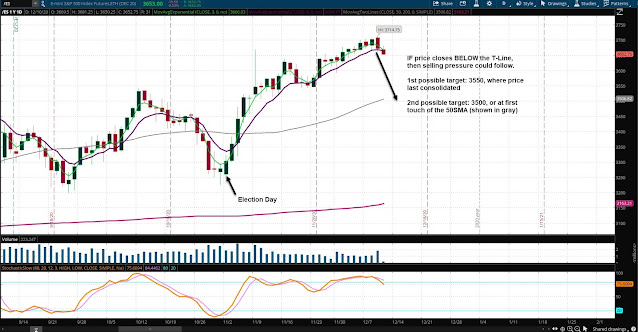 IF price closes below the T-Line, then I could easily see selling pressure coming into play.

First target: 3550, where price was previously in consolidation

If this happens, it's quite possible that this will be just a normal correction.

On December 15, the Electoral College votes will be certified. Barring a major surprise, the markets could resume their bull run.

Markets Take the Stairs Going Up, and the Elevator Going Down 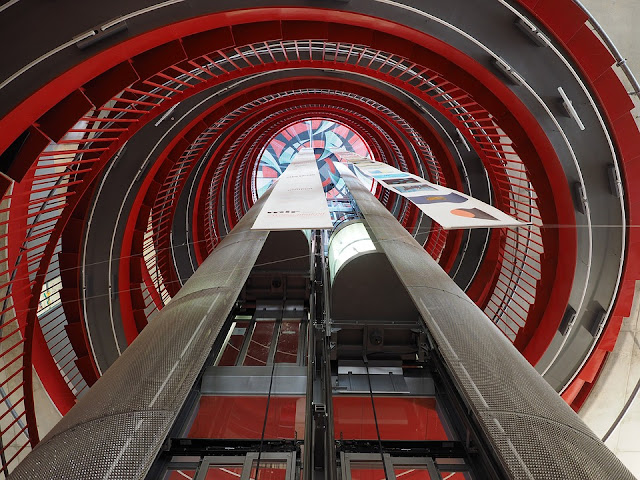 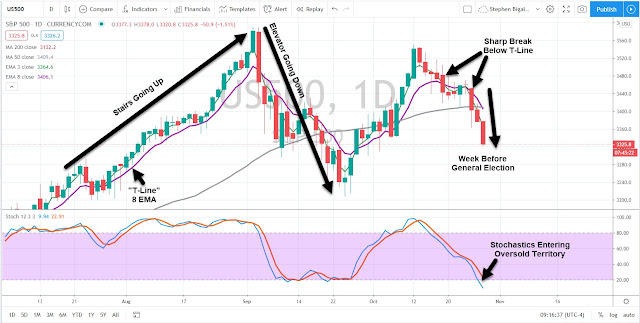 Look at the difference between the length of each green daily candlestick on the way up. You will quickly notice that they are much smaller than the red candlesticks on the way down.
It's also important to note the relationship of the markets in relationship to  the "T-Line" (8 EMA), which is plotted in purple. On an uptrend, the market travels above the T-Line. On a downtrend, the market travels below the T-Line.
Finally, Stochastics (set at 12,3,3) can help you identify when markets are overbought or oversold, signaling a potential reversal. When it's above the 80 line, a move to the downside is imminent. If it's below the 20 line, a rally back to the upside is also imminent.
Election Week - What's happening?
The US Equity Indices (Dow, Nasdaq, S&P 500, Russell 2000) all broke sharply below the T-Line which suggested that strong selling pressure was in progress.
You can argue all day long as to why that is happening. Covid-19 surge, Stimulus deal delayed, Election-Day jitters prompting a wave of profit taking, or maybe a combination of all. To me, none of that matters. The charts graphically depict investor reaction to the events of the day.
How to trade this?
For my part, I have been extremely cautious over the past 2 weeks. While I trust the market's relationship with the T-Line, I'm also aware that markets can reverse sharply on a tweet.
So, I have consciously made the decision to reduce my exposure to risk through the General Election.
With Nadex, there are a few ways to do that:
Stocks take the elevator going down, and this week has been a classic illustration of that adage.
On Tuesday evening at 6pm ET, Nadex opened with fresh new strikes for the following day. The markets closed bearish that day for the 2nd consecutive day, so the decision was made to follow the prevailing down trade, but also to choose a strike price that would reduce my exposure for risk, while maximizing potential gain.

I placed Limit Orders for the following US Equity Indices:
I also placed 2 trades on Forex pairs. One trade one, the other was losing. They cancelled each other out.
In total, I had $600 tied up in risk on the US Equity Trades.  By 8:30am ET, I closed those trades out for $965, representing a 160 percent return on capital risked overnight.
Not a bad trade to wake up to. I decided to cash out with a handsome profit simply because there was no way of telling what the markets would do after the Opening Bell.

This was a low risk, high reward approach to trading uncertainty in the week prior to the General Election.
Posted by Cam White at 7:28 AM 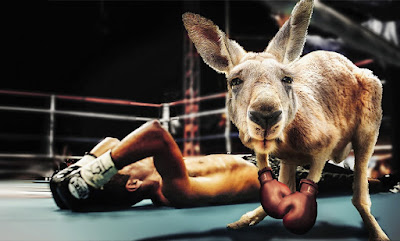 In my last blog post, I talked about the "Rubber Band" T-Line Trade.

While I'm not crazy about the name of this strategy, it does depict the relationship betwen the 3 Exponential Moving Average (EMA)against the T-Line (8 EMA).

These 2 moving averages track along with each other, but the 3EMA occasionally gaps away from the T-Line. When that happens, just like a stretched rubber band, it always snaps back.

You can catch some very nice price moves with Nadex, risking very little for a potentially nice gain. All you need to do is spot the gap away, and then look for the snap-back to happen.

Today the  US 500 was on a down trend, and the 3 EMA was Gapping away from the T-Line on the 4-Hour charts. 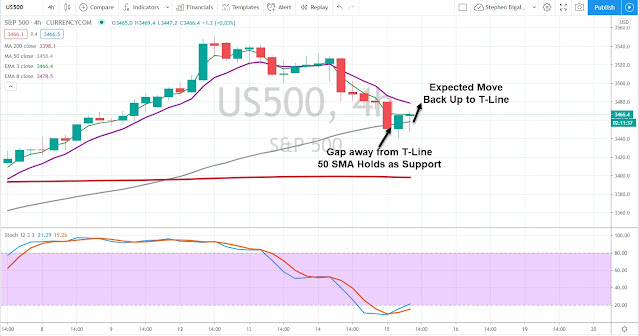 Notice how the Green 3 EMA gapped down away from the purple T-Line. Just like it has done in the past, the market was trying to make its way back to the T-Line.

That's when I decided to try doing a Nadex "Knock-Out" Trade.

Knockouts resemble traditional futures trades, with the exception that they have a hard floor and a hard ceiling.

You are not married to the trade. You can exit any time you want to lock in profits or to pare losses.

In this case, my profit target was a touch of the T-Line, about 70 or so ticks away.

Sure enough, the market ground its way back up to the T-Line and I exited for a 65 Tick profit, or $65 on one contract traded.

There are lots of ways to trade with Nadex, and Knockouts can be a nice way to capture sudden price moves. 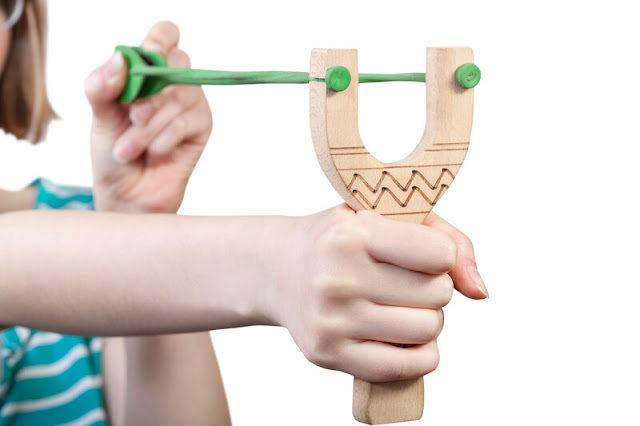 What happens when you pull back on a rubber band? It snaps back, right?

The same happens with price in the markets when you plot the 3 Exponential Moving Average (EMA) and 8 EMA on your charts.

The 3 EMA tracks along with the 8 EMA, but every time it gaps away too far, it snaps right back to the T- Line, as seen on the chart below.

Notice what happens every time the 3 EMA (plotted in green) gaps away from the purple T-Line. It snaps back like a rubber band. In fact, the further it gaps away, the harder it is more likely to snap back.

This can provide some excellent trading opportunities if you spot the 3 EMA gapping away from the T-Line.

In the daily chart above you can see that the US 500 futures are bullish, but also gapping above the T-Line. Looking at the intraday 15-minute charts, the US 500 started to plunge.

Knowing where the market had the potential to drop to, I chose to SELL the US 500 with Nadex Binary Options as soon as price started to plummet at a price level nearer to the T-Line.

Within 90 minutes, the market dove through my strike price and kept diving, like the rubber band snapping back. This trade was flashing a profit of $398.75 and I opted to close the trade for a 560% return on capital risked with in 90 minutes.

When you plot the 3 EMA and the 8 EMA on your charts, it will expose some prime opportunities to capture fast intraday price movements.

Using the 80 Percent Rule in Your Trading 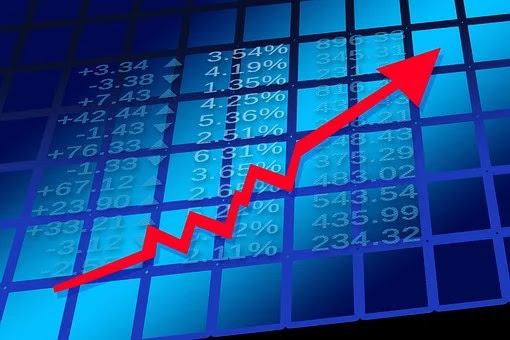 If your charting platform supports Market Profile or Volume Profile, then there is a way to identify potential large moves in price during the day.

In this 15-Minute chart of the emini S&P 500 futures, the gray box represents the Value Area Box. Again this box depicts where 70% of price volume occurred during the previous day.
The 80% Rule
If price enters the Value Area Box and remains inside the box for an hour or so, then there's an 80% chance, that price will travel to the other side of the box.
In this example, price dropped down and penetrated through the Value Area Box at 10:45am ET. By noon, it had traveled down halfway through the box.

After moving against me briefly on a pullback, price took a hard dive through the bottom of the Value area box and blew through the strike price.
At 3:01 EDT, I decided to Exit the trade, with a BUY for $10.25 for a $68.50 profit per contract traded, or $685.00, less exchange fees of $20.
The 80% rule can provide a great opportunity to capitalize on price movement if you spot the opportunity.
Posted by Cam White at 12:43 PM 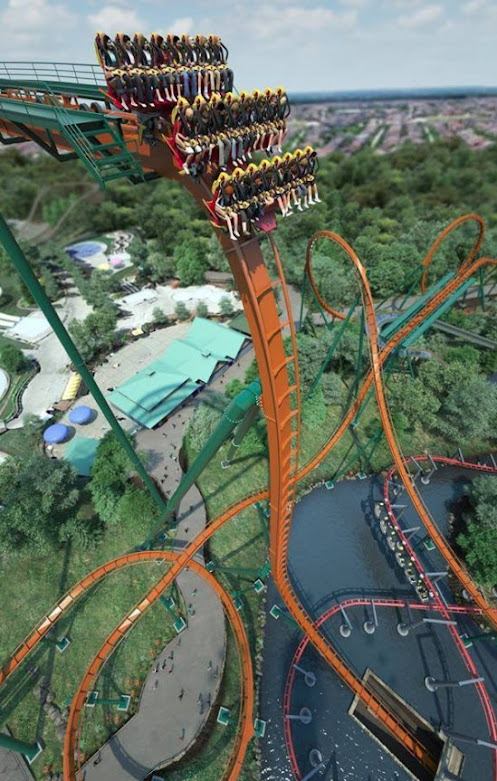 The U.S. markets had been on a nice, steady progressive uptrend for the past several weeks.

Wednesday was no exception and then the markets gapped-up huge. Would the bull market continue on Thursday? To my way of thinking, why not. I placed my bullish orders on all the US Equity Indices, risking $50 to make $50 per contract.

A shared my bullish market out look with a mentor, Stephen Bigalow. He advised me to be careful, explaining that a large gap-up can also result in profit-taking coming in. While I had the opportunity to back out of my orders for a tiny loss, I decided to stay in the trade.

Stephen was right, and I got run over. When I woke up in the morning, I was deep in the red. All of my trades closed for total losses. In all, $1,500 was lost.

While that hurts, there was a silver lining to this trade.

Sure, Thursday sucked. But I was glad that I stuck to risk management. Losses happen.
Okay, On to Friday...
Here was my thought process for Friday:

In just over an hour, most of my trades were up big, resulting in a $1,410 available profit out of a maximum total of $1,800 available.

With 5 hours remaining in the trading day, I opted to cash out. In just a few hours, I was able to recoup almost all of the losses from the previous day.